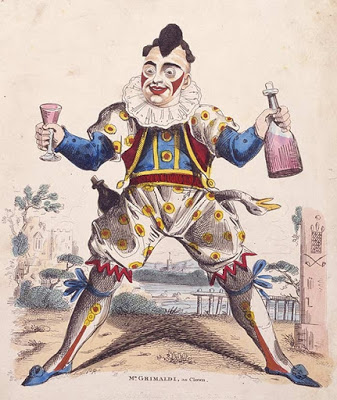 On a deliciously crisp December morning step through the gate of Joseph Grimaldi park on Pentonville Road. A little way ahead you will see a grave surrounded by ornate black railings, decorated with traditional Sock and Buskin theatrical masks and sometimes swathed in party streamers or ‘jewels’. Ignore this for a moment and walk towards the two coffin shaped sculptures set into the ground towards the right hand wall.
One ‘coffin’ is for renowned pantomime clown Joseph Grimaldi, the other for his mentor Charles Dibdin.

Now remember the 1988 traditional film ‘Big’ and channel your inner child to jump and dance on the bronze plates which are configured to play ‘Hot Codlins’ the jolly story of a old woman becoming progressively more drunk as she tries to sell her hot sticky toffee apples. Composed by John Whitaker with lyrics by Dibdin, Grimaldi encouraged audience participation during the song so do ask your companions to shout the missing words and join in with the chorus.
Take a short break after your exertions and perhaps savour a cold codlin before walking over to Grimaldi’s actual grave.

Grimaldi suffered from depression and was terrified of death and grave robbers which may explain why he requested that his family remove his head when he died. To fulfil her fathers wishes his daughter reluctantly placed her hand on the doctors surgical saw. Turning away from the horror she still heard the crunch and splintering of the saw as it cut through bone and sinew..*
Performers at Drury Lane Theatre claim to have felt kicks from the long departed clown’s boot and several to have seen his disembodied head eerily floating through the air backstage.
Sleep well everyone!

🎶 Hot Codlins 🎶
A little old woman her living she got
By selling hot codlins, hot! hot! hot!
And this little old woman who codlins sold,
Though her codlins were hot, she felt herself cold;
So to keep herself warm she thought it no sin,
To fetch for herself a quartern of ..
Ri tol, etc.
This little old woman set off in a trot,
To fetch her a quartern of hot! hot! hot!
She swallowed one glass and it was so nice,
She tipp’d off another in a trice;
The glass she fill’d till the bottle shrunk,
And this little old woman they say got …
Ri tol, etc.
This little old woman, while muzzy she got,
Some boys stole her codlins, hot! hot! hot!
Powder under her pan put, and in it round stones;
Says the little old woman, ‘These apples have bones!’
The powder the pan in her face did send,
Which sent the old woman on her latter …
Ri tol, etc.
The little old woman then up she got,
All in a fury hot! hot! hot!
Says she, ‘Such boys, sure, never were known,
They never will let an old woman alone.
Now here is a moral, round let it buzz,
If you mean to sell codlins, never get …
Ri tol, etc.
Sources:
CV Artist Henry Krokatsis
http://www.vigogallery.com/uploads/VIGO-Henry-Krokatsis-CV.pdf
Memoirs: Joseph Grimaldi, Charles Dickens, George Cruikshank, London, Routledge,1853.
* The Pantomime Life of Joseph Grimaldi: Laughter, Madness and the Story of Britain’s Greatest Comedian, Andrew-McConnell-Stott, Cannongate Books, 2009
There is an 1667 version of the song here:
https://archive.org/details/collectionofsong00mack/page/156?q=Hot+codlins
Creative Review
https://web.archive.org/web/20140202095915/http://www.creativereview.co.uk/cr-blog/2010/september/joseph-grimaldi-clown-henry-krokatsis
Full lyrics of Hot Codlins from https://archive.org/details/victoriansong029921mbp/page/n9